What Are Hockey Sticks Made Of? Wood, Composite, & Aluminum Sticks

Watch any National Hockey League game, and you will see a dizzying number of sticks used on the ice. They may look simple, but nothing could be further from the truth. Modern hockey sticks are as much science as art. Every hockey stick used in the NHL conforms to a player’s specific weight, curve, and flex preferences. In this article, we will discuss the types of hockey sticks, hockey stick components, NHL stick regulations, and how to choose your perfect stick.

Hockey Sticks Through the Years 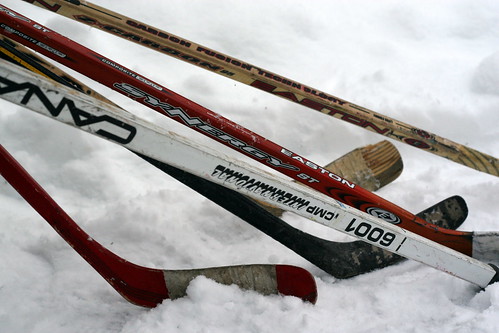 Over the years, hockey sticks have been made from many different materials. Here are the three main kinds of hockey sticks and how they are made.

Composite hockey sticks are the most popular today. These hockey sticks are made from carbon fiber sheets impregnated with partially cured resin. Composite shafts are made by fusing up to 15 layers of carbon fiber sheets using epoxy resin. Sheets are laid in opposite directions for optimum strength. A variety of resins are available to hockey stick manufacturers, each with unique properties. Once the stick has cured, the shaft is coated in a durable plastic resin.

The hockey stick blade is mostly foam. Each foam core is soaked in resin and covered in carbon sheets. Epoxy foam is favored for blades because of the springy feel it gives to hockey sticks. Completed blades are placed in a mold that angles, curves, and bonds it to the shaft.

Players love composite sticks because they feel and flex like an old-fashioned wood hockey stick but are as lightweight as an aluminum stick. Professional players can also customize composite hockey sticks to their personal preferences in weight, flex, curve, and shape.

Parts of a Hockey Stick

The hockey stick is composed of the shaft and the blade. Here are some of the basic properties of each hockey stick component.

Most NHL hockey players use sticks that have a shaft length of 63 inches or less. Players taller than 6 foot, 6 inches can use a hockey stick that is 65 inches long. Shafts can be a variety of shapes, including round, rectangular, and tapered. High-end hockey sticks used by professionals often include a variety of textures along the shaft to increase grip.

A shaft’s flexibility is directly related to the amount of force a player puts on the puck. As a general rule, forwards prefer more flexible shafts to improve their wrist shots, passing, and stick handling. Defensive players generally prefer sticks with less flexible shafts.

Per NHL regulations, a hockey stick blade must be between 2 and 12.5 inches long and no more than 3 inches high. The first hockey sticks were straight, but curving the blade became popularized by Chicago Blackhawks Stan Mikita. Mikita and teammate Bobby Hull curved their blades using hot water and door jams. Today, composite blades are curved using a mold set to a company or player’s preferences.

A curved blade can give players an edge on the ice. Curving at the toe (end) of the blade is advantageous for wrist shots and moving the puck. Many defensive players prefer a blade curved at the heel (the part closest to the shaft). A heel-curved blade helps create blistering slap shots. The maximum depth of the curve is limited in the NHL to three-fourths of an inch.

Hockey Stick Rules on the Ice

The NHL has several rules directly related to hockey stick measurements and conditions.

The National Hockey League regulates the size of player’s sticks. As noted earlier, the shaft length, curve depth, and blade length are strictly regulated to ensure fair play. Unlike the sticks of other players, the goaltender stick curvature is not restricted by the NHL.

A slashing penalty results from a player swinging their stick at an opponent. Using your hockey stick to break the stick of an opposing player will result in a two-minute penalty.

The right hockey stick can improve your puck handling, make your slap shots faster, and help you sneak in wrist shots. Whether you are a beginner or have been playing hockey for years, Gunzo’s has the equipment and expertise you need to play your best game. Visit any of our Chicago locations and let us help you find the perfect hockey stick.